PREVIOUSLY ON 24: (doggone it – I was determined to see that ONCE this season, even if there are no new episodes out right now…)

Part One: The Journey.

And now…for Part Three: The Payoff…

So, on January 10, I was told by my cohort who was in charge of designing and implementing the Leadership Summit that – not so much that I wasn’t able to present on Spirituality and Leadership, as it was (no joke) inappropriate that I present on this due to my position. That it could be seen as questionable that I would want to present on this, because if – and seriously, I can’t make this crap up – I presented myself as being of one religious persuasion, it might make some of the students I work with uncomfortable and they would not seek me out as a campus resource as much.

So, I was told that not only would I have to scrap the presentation I had been researching, preparing and working on for three days and replace it with something else entirely new, but a local pastor had been contacted to present on spiritual leadership as it was far more appropriate for a minister to speak on such matters. It was made clear to me that it was “better” if I present on another topic – or topics – of my choosing that were more neutral in tone. That yes, the students who were working on the selecting and crafting of the day-long intensive series of workshops had indeed requested for a presenter to address the idea of spirituality and leadership, but that it just would not and could not be me.

This, as the kids say, royally cheesed me off.

Now, I do feel the need to drop a caveat here: I do not believe that this in any way reflected the choice or opinion of my cohort. I did not hold her in blame for this. Neither will I editorialize on what I perceived as the manner in which the information was delivered nor at the timing of it. I simply at this time knew that the work I’d been doing for three days – both in the office and at home – was officially now for naught.

After getting REALLY angry (Ashley had yet to actually see me this upset before – I remember the afternoon of the 10th when I came home for lunch and first told her about this – oh, the pure venom that was just spewing out of my mouth at the time…), I decided to take the only approach I felt that I could outside of praying for some direct divine intervention: I decided to submit a second proposal, stating that I would present on both topics, but that I was not going to give up the chance to present on spirituality and leadership, and that I was exceptionally passionate about doing so.

My argument was that it made absolutely no sense that it was perfectly acceptable and okay for me as a white, heterosexual male from the South coming from a middle-class income to be allowed and even encouraged to speak on topics of diversity – including socioeconomic and racial and ethnic differences – as well as on LGBT issues, but that it was presumptuous and incorrect to assume that only an ordained minister could speak on matters of spirituality. Now, the guy who was asked directly to present on CHRISTIAN leadership (which was his subject matter) at the Leadership Summit is a really cool guy and I respect him loads, and I was crystal clear that while his presentation was focused at a specific target audience – namely, Christians – mine was a little more broad in its scope…although it would be filtered through the lens of a Christ follower.

And...they agreed to let me speak. On both. 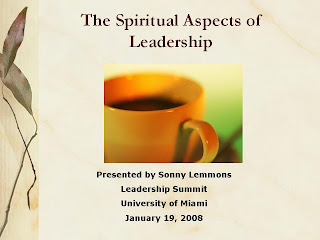 I honestly think it was only the fact that I cried foul and even discrimination that allowed me to actually follow through with being able to present on spirituality…which is pretty stinking sad, if you stop to think about it. However, it’s also a little bit of a testament of the times we live in that THAT was what made it okay for me to actually speak about something I was passionate about, and to be able to – as the pastor at Mosaic Miami has said – leverage my position for the Kingdom.

What did give this entire situation one moment of beauty was the fact that we were told in advance to prepare only about 20-25 copies of our presentations for handouts, because – really – not that many people would be interested in seeing or hearing about the topic. I wound up making 40 copies of the handouts of BOTH my presentations (the other being “Confessions of a Reluctant Leader: How To Lead Courageously Even When You Don’t Want To”), because I knew that other people who weren’t attending the Leadership Summit had asked me for copies of my presentations.

On Saturday, January 19, 2008, I held both my sessions back-to-back that afternoon in a classroom that held 60 people. Both sessions were packed to capacity. I ran out of handouts and business cards, and my session on “Spirituality and Leadership” wound up being one of the highest-rated sessions at the Summit in terms of evaluations by the students who attended.

I don’t state the above to brag on myself in any way, to thumb my nose at those who poo-pooed my idea of presenting on spirituality, nor to say “I win.” I mention it just to point out that – yes, there was and still apparently is a hunger and desire to understand things through heaven’s lens, and that God can move in powerful ways, especially when people try to stop him.

And anyone who’d like a free copy of my session – all ya gotta do is email me and ask, and I’ll send you an electronic copy for free. 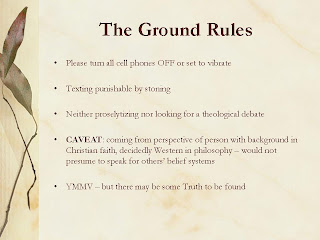 In part one of this little missive, we learned of what I have lovingly called “The Journey” of getting set up for the Leadership Summit, and to be able to present on “Spirituality and Leadership.” Oh, but if only had I know that the journey was going to be in some ways the easiest part of this all…

So, after I emailed my cohort to say I was willing and able to present, I waited to hear back from her to get the all-clear, so that I could in fact start researching the topic. See, while I was fairly sure that I knew quite a bit about both leadership and spirituality, I wanted to make certain that I could – and would! – sound more or less intelligent when I presented on them as a joined idea. I mean, I was fairly well-versed on leadership development, and since spirituality is…well, let’s just say it’s a hobby of mine, I knew that I had enough heart material to present on, but I wanted to make this as intellectual as I could. I built into my “research time” a buffer so that I would have puh-lenty of time to tailor this thing to the exact specifications that I wanted – thus, why I first emailed her before Christmas break. I thought, if nothing else, the opportunity to claim the need to do research would afford me some reading time away from the lunacy that can be “family time” during the period that Ash & I would be on the road and away from Miami.

So…I waited. And waited. But, word never came if my proposal was accepted. So, I didn’t get to have a very nerdy holiday season after all. (This is, however, a partial lie – go on and ask me how many episodes of Doctor Who I wound up watching…).

Fast-forward to January 3, 2008. Everyone is back from the holidays, the office is back open…and I still haven’t heard one peep out of the cubicle behind me to let me know if I was presenting on Spirituality & Leadership, or even anything else…

January 7: the word comes in. She has okayed my proposal. Now I can begin the researching and writing in earnest. Which I do…for two solid days.

Now, at this point, I feel I need to explain something. The sheer, simple fact that I was about to embark on working on something I was passionate about, something I cared about, something that energized me…those of you who have worked closely with me in the past know “that look” that I get. Wendi, my former GA, can still probably mimic the giddy, cackling noises that emanate from me when I get excited…HAPPY excited. I was finding purpose in my job, I was glad to be taking part in something work-related, and really, for the first time since starting this job, I felt like I was glad to be here, like I was glad to be a part of what was going on, and I was being fulfilled by my work.

Should’a known THAT wouldn’t last long…
Scribbled by Unknown at 10:46:00 PM No comments: 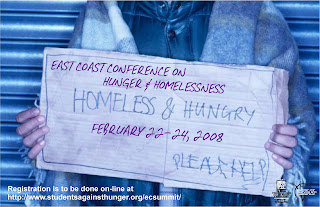 This is what I'll be involved in for the next week. Expect sporadic postings (sheesh - as if they weren't already...) - but there will be exciting news posted by week's end.

I have come not to speak about my Valentine's Day experiences, the first of mine as husband to Ashley (shameless romantic plug), nor to brag about the cool toy she got me.

Instead, lemme share this little tidbit: so, today being the day of hearts, flowers, candy, and gym membership renewals after eating all the aforementioned candy, the University of Miami branch of Campus Crusade for Christ was passing out these little cards in the breezeway outside the student union where I currently work. They're a little bigger than 3x5 index cards, and one side just says "HAPPY VALENTINE'S DAY - Much Love, Campus Crusade for Christ UMIAMI" and the opposite side reads this little quote from I Corinthians 13. Stylistically, it's a cool little promo piece, and it looks good.

So, when the student worker who handed this to me, I thought she was showing it to me strictly from an aesthetic standpoint. As in, "Hey, graphics boy, you'll appreciate the way this looks."

Instead, what she said - in a VERY uncharacteristic non-sarcastic tone - was, "I thought you might be interested in this, seeing as how you're like the spiritual leader of the office."

Sometimes...God just does stuff that amazes me and throws me for a loop, reminding me of where I am, and why I'm here...even when I don't want to be where I am, He's showing me the purpose ((c) and TM 2008 Rick Warren) in why I am here at this time.

It just made me smile a little today...
Scribbled by Unknown at 2:21:00 PM No comments:

SPIRITUALITY AND LEADERSHIP - part one: The Journey