It's been two weeks since we lost Cricket.  I know that some people might think I harp on her loss too much, but the wound - and her absence - is still real and too painful at times.  Last night, while sitting on the floor with Maggie, I just started crying because I'm still used to having to pet two dogs at once, and having them compete for the title of "No, daddy, I'm the cutest - pay attention to me, and not her!"
I've had this freaking sinus infection thing in my nose/chest for almost a week and a half solid now.  Normally, were I living in - say - Athens, Jackson, or somewhere where there is a discernable change in the climate which happens during the Fall, I would say it's just a seasonal allergy.  What do you call it and how do you treat it when there ARE no seasons where you live?  I think I'm experiencing ghost pain in my sinus cavity.  My mind is too creative for its own good if it can come up with crap like this.
Since it's been an age since I gave any update on my dad, here's the latest:  he's back in the hospital for the next 48 hours due to - get this - salt deficiency.  Yes.  Salt.  As some of you may know, chemotherapy causes severe nausea.  Well, the medicine the oncologist prescribed for my dad did not mix well with the antibiotics and other chemicals stewing in his body right now, which led to him becoming disoriented to the point of he was acting like he was suffering from a form of dementia.  So, he was admitted back to the hospital where they're dropping a couple of saline packs into him, while encouraging him to eat yogurt, pudding, applesauce and other soft foods instead of just slogging back the Ensure drinks he's been exclusively ingesting as of late.
All the tests that have been run - the MRI's, the CAT scans, the other tests with three letter abbreviations - have all come back negative, which means that he's just had a small hiccup on the road to recovery.  At least, that's the hope/prayer at this time.
I guess all things considered, salt deficiency and the treatment thereof is a comparatively easy problem to lick (yes, that was meant as a pun).  It beats him having had salt deficiency due to running into this (extra geek points to all Trekkies reading this who giggle at this photo): 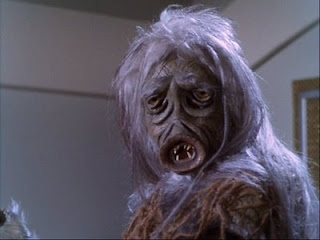 Now go forth and hug someone.  Show love.  And remember that your smile matters.
Scribbled by Unknown at 10:25:00 AM