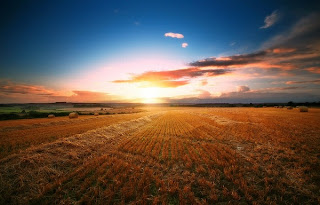 I'm either an idiot, or I have more faith that I ever thought possible. Right now, I'm caught between being too nervous and too nauseous to be able to discern the two.

A movie came out years ago which contains themes and motifs that resonate with me to this day, decades after the first time I watched it. Field of Dreams. Now, I do need to state I am not a sports person. I like college football, and I have learned to enjoy ice hockey, but I'm not an athlete. Outside of playing soccer when was in elementary school, my sports skills are non-existent. So why would this particular movie stay with my non-athletic self?

Aside from the ending making me cry every time I watch it ("Why don't you introduce him to his granddaughter?"), the film speaks to the power of dreams, the power of faith in pursuing them even when the world says you're crazy, and what it takes to have the courage to go after these dreams in the first place. So, when I decided to quit my job to become a stay-at-home dad, I felt very much like I was plowing down some of the corn in my life to build a metaphorical baseball field. To butcher one of the catch-phrases from the film, I was building a home for Kai to come to.

My mistake was in getting cocky and not remembering the rest of this film. In the movie, Ray Kinsella had to step out in faith at least once more.

After a weighty, gut-wrenching, no-sleep-allowed period of days this past week wherein which I debated to put Kai in daycare so that I could accept a full-time paying position outside of the home, I have decided to remain as a stay-at-home dad. Yes. In the midst of a recession where the unemployment rate is as high as it is - I was offered a job and turned it down. Trust me: this was NOT an easy decision. We went back-and-forth about possible ways to make it happen, but they all ultimately led back to the same conclusion: I would be away from Kai when he might need me the most.

The reasons for my decision to stay gainfully unemployed are both simple and complex. Part of it is due to the fact that Kai has had numerous recurring health issues, all stemming from his being diagnosed a yea and a half ago with chronic benign neutropenia. I have to admit: if this is the BENIGN portion of this disease, I can't imagine how it could be worse. From breathing issues which have resulted in three trips to the ER with him in one year, to having to monitor where he goes, what he eats, and how clean he keeps his hands (no easy task for a toddler), taking care of him outside of what would be routine for taking care of any toddler has been intense. Add on to the fact that now he has to be put through a full battery of allergy tests to help determine what has triggered an early on-set of asthma at age two-and-a-half.... To think that I would willingly place him in an environment - which, while probably not designed as an intentional germ-filled cesspool, it would be for someone with a lowered white blood cell count - all so that I could get a paycheck?

Any parent who elects to be a full-time caregiver can tell you that the siren song of going back to an office is very alluring. Being able to advance in your career, being able to be in a position where you not only professionally thrive but are successful, being able to carry on a conversation with ADULTS...these are all very tempting and - for some - exactly what they are supposed to do. Not every parent is cut out to stay home with their kid(s), just like - sadly - not every person who has a kid is cut out to be a parent.

I couldn't sign the papers selling the farm. I couldn't look at Kai and knowingly, willingly ask that he be taken care of by strangers who - yes - would look after him and care for him, but in the probable event that he would have another episode and have breathing issues? Or develop a high-grade fever incredibly fast? Or that some kid ate a peanut butter and jelly sandwich would then hug him, causing him to go into anaphylactic shock?

He'd be confused and scared enough as it is. To not have mommy or daddy there to comfort him might be worse on him than the actual incident.

I'm a father. Not a sperm donor. I take this responsibility a bit seriously.

And then, there was the job itself. Was it a (not "the") right job? Maybe. I think so. Was it the right time for this job? That's where the waters get a little murky.

For as much as I have loved taking care of Kai, I know there is an expiration date attached to the days I will spend with him at home. Sooner rather than later, he'll be headed to Pre-K, and this will mean I will lose the rationale for me being a stay-at-home dad. After that point, I think the best descriptor of me might be "leech" or "bum." So I know that in the near future, I'll be back to dress pants, ties, and setting up meetings on Outlook.

One of the greatest benefits for me that staying home has yielded is my writing. I mean, YOU'RE reading this right now, aren't you? After years of shutting down and shutting up my muse, I feel much more comfortable in front of my keyboard - so much so that I am willing to quantify my writings as "mediocre" instead of "total suckage" like I used to think of them. I have made connections - friends, even - on various social media platforms, many of which have resulted in me being able to guest-post at websites. To speak on occasion. To act as a consultant on some items and issues. While most of these pay only in experience and exposure, they have been invaluable. This does not mean that I in any way think that "people will come, Ray. People will most definitely come" to my website, to read anything I write, or that I will even get a hug let alone payment for anything I do.


Taking a job, one that I know I would be good at, but on that ultimately would require me to cease actively pursuing a passion that I feel enriched by, would feel - to me - like I was giving up on faith. Like I was not willing to accept a byproduct and blessing for me of the faith I had stepped out in. I was staying home for Kai, for my family, and God was honoring this by giving me a gift that even if no one else understood it, I knew the symbolism behind. I knew the importance and significance in it. The passage of Joel 2:25 is not just words written on a page, but a promise.


While I'd not like to spend my retirement years sleeping in a cardboard box due to me not having a steady income for what could wind up being the better part of half a decade, this is my calling right now. This is my job. This is my season. This is my building it, easing his pain, and going the distance.

Being a husband. A dad. A writer of stuff. A receiver of grace. A drinker of coffee.

Because sometimes, you just have to play catch and pray for the best.

"I'm a father. Not a sperm donor. I take this responsibility a bit seriously"

That's a heater sonny. Hot in the
Glove of
Life...
Love you, can't wait to hug you on whatever field He provides...