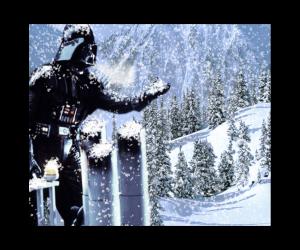 The year was 1999. A new millennium was set to begin, the impending terror of Y2K was starting to reach a crescendo, and for millions around the country, it was the culmination of years of patience and anticipation: May 25th would see the release of STAR WARS: THE PHANTOM MENACE. I actually took off work to go to a screening in New Orleans, because this moment was what I felt like I had waited for all of my adult life. Sixteen years had passed since RETURN OF THE JEDI had debuted. For once, I did NOT have to wait for my parents to take me to the theater when a STAR WARS film was playing.

Around 45 minutes into the film, I hit that moment, the moment that has only happened to me before a handful of times while watching a movie. I took my eyes from the screen, checked my watch, and was amazed that three and a half hours hadn't passed already...because it sure felt like time had lost all meaning. THIS was what we'd waited for all these years? George Lucas had 16 years to get this story right, and this was what we got? A CGI story on the trade deficit?

In this season when we reflect upon the coming of Messiah, it's interesting to transpose this idea of remembering how I felt about the rebirth of the STAR WARS saga with Jesus' birth. His birth had been prophesied about and foretold for centuries, yet when He arrived - in a manger, in a corner of an unimportant city - this was not what was expected. Yet unlike what Lucas pulled with STAR WARS, this was the plan.

The passage in Mark 13:24-37 illustrates how Jesus, when speaking about His return, continues the theme regarding how much prophecy had been made - and was continuing to be made - about the coming of the Messiah. The repeated theme of "stay alert - stay awake - be ready" was not given as a warning because Jesus is going to jump out from behind a cloud and yell "GOTCHA!" It's because blepo, the word translated in verse 33 as "take heed," means to express a more intentional, earnest contemplation. To be aware. Or, as the Psalmist said, to "be still and know."

At the human core of waiting and anticipating, we tend to go from the excited to the bland: the energy of a new job quickly settles to a routine. A new romantic relationship fizzles into a routine ("You wanna just go grab some pizza?"). And no matter how much you may love the Christmas season, when the decorations start to go on sale in August, you will eventually become jaded to the sight of them as you enter a store. What was supposed to excite you has become something...routine.

Maybe one of the reasons why all the prophecies people make about the return of Jesus fail is that if we knew that time and date, in many ways we'd anticipate it as the end and not the start. We'd lose the excitement, the joy and love of life and settle into a routine. Of waiting. But not waiting with eager anticipation for what was to come next (much like I did at the outset with the STAR WARS Prequels) but waiting for what we think might come next in the plan. We'd be ready to just wrap things up an move on - but that's not what we're called to do.

"Advent" is translated as "coming" - but what's "nerd cool" is that the verb usage of "Advent" is in the perfect passive participle. This means that when we consider Advent, the coming is perceived at the same time in the past, present, and future. We find Him coming first as a child, then in our hearts, and eventually will be in person again. This means there is never a time when Christ is not with you. John 4:24 states "For God is Spirit, so those who worship him must worship in spirit and in truth." Spirit permeates. Even the schlockiest of ghost hunter shows on television often talk about a presence. Here, here, here - all around us.

At its deepest level, Advent is an invitation to give up our search & simply let ourselves be found. To celebrate that coming by being willing to be found. Even the Parable of the Prodigal Son in Luke 15 speaks to how the father came to the son when we was searching for a way to return.

In this season, more than considering what you are waiting for - presents, family, or a written apology from George Lucas - understand, reflect and meditate on how we already have an answer. He is here. I AM is here.

In the search, in the finding, and in the daily living of our lives, we have already been found. And found loved.

And it's all according to plan.