Book Review: IT COULD HAPPEN TOMORROW

I will admit: Gary Frazier's book IT COULD HAPPEN TOMORROW from New Leaf Press is NOT the typical kind of a book about spirituality, faith, or Christianity that I find myself reading. I have become burned out on books about end-times prophecies that are either sensationalized or full of nothing but the author's opinions or creative liberties. Most of the time, Christian-themed books about the end of the world come across as either works speculative fiction that minimally have any kind of Biblical foundation, or else they read like the manifesto of an individual who is clearly suffering from some form of mental instability, because they "know" and can "accurately predict" moments which will lead up to the Rapture. 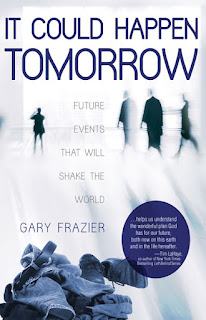 Thankfully, Frazier's book is nothing like that. Utilizing the interpretation of Scripture found in the NIV, the author manages to show the balance between Old Testament prophecies, the visions recorded by the Apostle John found in the Book of Revelation, and all subsequent relevant passages found in the Bible. The volume of predictions found in Scripture and laid out by the author that show such a concise flow of and chain of documented and verifiable events that are centuries if not millennia apart from when first predicted and what actually transpired should give the reader pause to rethink their own opinion about the End Times, even of the reader is not a believer in Christ.

The book is relatively free of editorialized or biased opinions and instead is quite possibly the closest thing one can get to a bias-free study of Scripture and historical events which are set to lead to the Rapture. I only furrowed my brow and grunted slightly at a couple of the accusations made by Frazier which seemed to come out of nowhere other than to "zing" a few modern ideas and beliefs; for example, I personally had an issue with the implication that EVERY aspect of either the Emergent Movement or Black Liberation Theology is inherently "Satanic." While there are undoubtedly components and individuals involved in each movement which are not entirely Godly, the same argument could be made for any traditional church. But I digress.

The book itself is good for individuals who are confused and unsure about all the various terms and ideas surrounding the End Times, because the author does an outstanding job of clarifying and codifying almost every key aspect, but a minimal baseline of knowledge about Biblical prophecy and Biblical history would be good to have going in to reading this book. This is not the text to hand to someone who is not a believer in Christ. This IS a good book to hand to someone who may have grown up in the Church and have heard these ideas all their life but not have the first clue of how they all fit together, or what any of them mean.

I received a copy of this book for review from the publisher but the opinion of it is my own and was not solicited, nor was a positive review required.
Scribbled by Unknown at 3:02:00 PM No comments:

"God has given Christianity a masculine feel." - John Piper


Sometimes, I think Jim Caveizel was miscast in Mel Gibson's film The Passion of the Christ. Sure, he managed to pull off the ideal of what we image a carpenter from 2000 years ago to have looked like, giving pastors something to show in a movie clip that is perhaps a bit more relevant to our faith than continually rolling out that one scene from Braveheart time and again. But given the verbal and written missteps so many men in leadership in the church say and make, perhaps Tim Allen might've made for a better - and more appropriate - Christ figure for them to relate to.

Because, guys? Sorry, but we're far more likely to blunder through things than to have some kind of barrel-chested awesomeness about us.

Case in point: as was most recently documented about John Piper by Rachel Held Evans, a number of male leaders in the church have tried to "man up" their definition of Christianity, so much so that they at times have all but reduced how we behave to a caricature of what we are supposed to be. At best, it provides comedic fodder for bloggers like me. At worst, it perpetuates both a stereotype and a reality of oppressive and heart-crushing attitudes and outlooks towards women, both in ministry and as a layperson.

The fact is that the early church was once years - more like centuries - ahead of its time in its treatment of women. While Jewish and Roman society was busy keeping women enslaved and treated like property, the church was appointing them to positions of leadership and responsibility. The early leaders in the church took Paul's admonitions in Corinthians, Romans, and Galatians that we are all one to heart and reflected them in deeds as well as words.

I'm not educated enough to know where or when the shift from equality to single-sidedness in the church occurred, but it's painful to see that half of the population of the planet is not represented on the stage of or in the leadership of our churches on a weekly basis. This winds up not only robbing many of the young women who attend our churches of a role model (well, not counting those who are interested in children's ministries, because that is sadly where we relegate a number of women to), but by default, we tend to concentrate on only half of the aspects of God. Namely, the aforementioned "masculine feel," because those behind the pulpit thumping their Bibles and their chests have either shut out the idea of God having a caring, nurturing, gather-you-all-together mentality (Matthew 23:37, anyone?), or they've never been told or taught how to look for, to seek these qualities of God.

How many of us would willingly admit to wanting to settle for knowing only half of the aspects of God, when we could easily have all of what is offered to us?

There's a reason Isaiah referred to Jesus' name as "Wonderful, Counselor, Almighty God, the Everlasting Father, the Prince of Peace." Looking at these words, it's obvious that they're on a continuum, ranging from ideas we consider "soft" to "strong" - or qualities we associate with feminine to masculine personalities - with the term "Almighty God" right there in the center, balancing it all out. The same Jesus who some look to solely as a conqueror also holds the name of counselor.

Balancing both aspects. Because that's Who and What God is: the center. I AM. The One who created us BOTH as a reflection of His image.

Do we need to have strong men in our churches, men who willingly step out of whatever stage of arrested development they may be in and into the person of who God has called them to be? Yup. Do we need to allow the "I AM A MAN" mentality to pervade and permeate our theology, our living, or our interacting with each other? Nope. To focus solely on one portion of God is to elevate that portion above...well, God, to be frank.

Which skates dangerously close to idolatry.

And unless I am mistaken, He still takes a moderately dim view on that.

For more on what my brothers in arms (and pierced hands) have written about on this topic, check out the links included here.