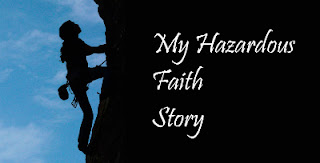 Note: I’m sharing My Hazardous Faith Story as part of a synchroblog connected with the release of Ed Cyzewski and Derek Cooper’s new book Hazardous: Committing to the Cost of Following Jesus.

I suppose it's both the blessing and the curse of being born and raised in the buckle of the Bible belt: being a "Christian" and assuming everyone else around you is as well comes as naturally as knowing instinctively that the tea you order in the restaurant is going to be sweet. Feeling like your faith might put you in danger only comes in social circles (because you don't want to appear to be TOO Christian) or in comparative denomination one-upmanship. Faith isn't so much hazardous as it complacent. ...which, in its own way, is more dangerous than anything.

My faith journey didn't take a "hazardous" turn until Ashley and I moved out of the Southeast and down to Miami for a few years (2007-2010). Several aspects of moving so far away from our geographic regions of birth seemed hazardous (says the white guy from Mississippi who couldn't and still can't speak a word of Spanish) but what I believed? That wasn't high on the list of things I felt I should be concerned about in when living in South Florida. We were newlyweds, starting new careers at a new university.

Clearly, everything was going to be exactly as we had always known it.

It was around the second or third week in my new job, during one of the down times in the office, when while casually chatting with some of the students workers I made some off-handed remark about trying to find a new church. Hey, THEY were the ones who asked how we were settling into Miami. Part of me still thinks they just liked to hear my accent and welcomed any chance to hear me speak, but I digress. Anyway, the ambient noise in the room became noticeably less ambient, and one by one they all sort of said "Ohhhh," turned around in their chairs, and became engrossed in the work or FreeCell game they had been ignoring. I shrugged, turned around, and didn't really give it much thought.

About an hour later, one of these same student workers came up to my desk and sat down in the chair next to mine. She had this glint in her eyes that looked simultaneously desperate and excited. Conspiratorially, she leaned in and whispered "Are you...a...Christian?" with a look that almost made me think she was going to follow this question up with "And are you wearing a wire tap?" I raised an eyebrow and slowly said "Yes...", not sure if I was going to be hugged or tased after whatever answer I gave. But when I answered in the affirmative, her body language took on a decidedly different slant: her face and shoulders relaxed, and her breath - which I didn't know she had been holding - came out almost with a sigh of relief.

She then explained to me that apparently people who believed...anything...were scarce within the administration of this university. The comparatively few students who attended campus ministries, church services, or congregated together did so rarely. Not that this school had declared an open hunting season on people of faith; it was simply that "we" were so few and far between at this institution.

What made the next three years even more interesting was the fact that when I "came out" as a Christian to some of my students, they couldn't believe it:

"But...you don't act like or talk like any of the Christians I've ever known," they would say to me time and again.

"In what way am I different?"

"You...like...me. You respect me as a person. We've laughed together, worked together. You care about issues of social justice as passionately as I do. You're just...different."

I had apparently never once preached to them about the "dangers" and "wrongness" of their sexual orientation, their faith or lack thereof, or their choice of recreational activities. I had instead shown love. I had given a bit of sweat equity in activities.

I had hazardously been myself.

And in doing so, exposed the hazards others had tried to set up around these kids.

Like what you read here? No? Don't worry - check out the synchroblog landing page: http://wp.me/PewoB-SN to read how others have shared their own Hazardous Faith Stories
Scribbled by Unknown at 5:00:00 AM

Great story Sonny. There is a lot of fear at a new place that we'll mess up relationships from the start and never fit in.

Thanks, Ed. It's not so much about the "right first impression" as it is just being transparent & being yourself from the get-go. That way, there's never an "I didn't know you were" moment - either positive or negative - in the relationship.

Sonny, I appreciated your story. I teach on a Christian campus, and live in a sort of Midwestern Bible belt, so I haven't experienced the reality of "coming out." But I do know what you mean by showing love. It's been shown to me like that, and I try to do the same to others. Thank you for sharing such a thoughtful essay.

Thank YOU for reading - and by the way, I started poking around your blog a bit. I think I may have just found a new great place on the Internet to sit and read a while. :)

This made me laugh! If I had a nickle for every time someone told me, "I don't like Christians, but you're different," I would have...well, still not much, because nickles are not a lot of money. I always want to say back, "Well, you need to meet more Christians then!"

Thanks! I actually was chuckling a little while writing it, wondering if the woman I had this conversation with even remembers this incident.


But I agree, many people need to meet more Christians. Well, those of us who act and not just speak. :)