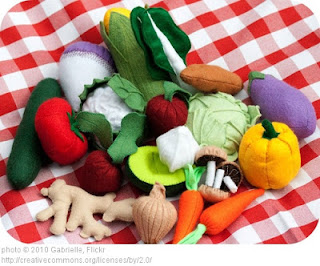 Roughly a year ago, I was in a local toy store with Kai. They had plenty of "floor model" toys for the kids to play with, which was great for an attention grabber, but wretched for trying to make it out of the store without purchasing something. Once we walked in, Kai made a beeline for the back wall, where he grabbed a plastic shopping cart and loaded it up with toy vegetables before heading to "cook" in the model kitchen.

A few minutes later, another parent, a mom, came in with a little boy who looked to be roughly the same age as Kai. He headed towards the kitchen area as well, but before he could join in the fun of pushing around a buggy full of faux bananas, his mom grabbed his arm to stop him. She then, in a not-too-subtle voice, announced to the store:

"No, we're going to go over here to go play with toys that little boys should play with."

You know: trucks. Swords. John Deere tractors. And other such clearly masculine things. 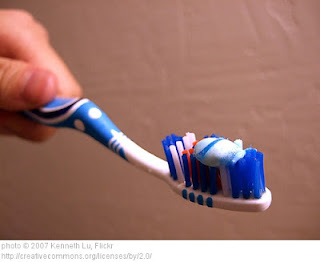 Last week, I took Kai to Target to go load up on many of the staples we needed at home. I knew his supply of toothpaste was running low, so we walked over to the appropriate aisle so he could select his next tube of fruit-flavored cavity protection.

He narrowed his choices for which toothpaste to get down to two based on the character on the front of the package: Thomas the Tank Engine or My Little Pony. After going back and forth, he finally settled on My Little Pony. There was another shopper on the aisle we were on, and she had been watching our debate on the pros and cons of which toothpaste to select with more than a little interest. After we put Kai's selection in the buggy, she approached me and asked me:

"Excuse me, but you are aware that toothpaste is for girls, aren't you?"

Clearly, these examples cite how I am failing as a father and as a man. I'm allowing my son to make poor life choices that will affect his sense of gender identity by letting him play with fake produce, to say nothing of how letting him use toothpaste with a cartoon horse on it will obviously cause him to not understand how to use a urinal.

Here's the thing: he's not even four years old yet. So what if he loves to pretend to cook? So what if TANGLED is his favorite Disney film? So what if he, in the cutest, sweetest manner possible, finds babies adorable and says "aww" whenever he sees one? So what if most mornings he wants to just sit and cuddle under a blanket on the couch for a few minutes while we watch TV?

Because he stays home with me, he sees me cook, clean, shop, do laundry - all the stereotypical "mom" duties. We spend hours each week reading, making crafts, and even hosting "dance parties" in the living room or outside in the backyard. I love the fact that he sees me - his dad - doing all of this. I love that he's going to grow up without a sense of predisposed gender roles within a relationship. I love the fact that instead of him staying all day in daycare, most of which have a predominantly female staff, he gets to see both of his parents interacting with him.

I've been called a "man fail." I've had my faith called into question because I have chosen for three-plus years to stay home with my kid and "let" my wife's work be the primary source of our income. I've had total strangers - moms, usually - look at me with distrust because I'm out alone with him at the park, the store, or elsewhere.

But I've also been called "daddy" by a bright-eyed kid with a mop of curly, sandy-brown hair. And the trust and love this kid shows me (which, admittedly, a lot of which will expire sometime around puberty) drowns out the voices and glances of people who would probably prefer it if I took him to a monster truck rally instead of Whole Foods.

The thing is, we play what he wants to play. He will go from pretending he's a superhero one minute to a ninja the next. We'll put on puppet shows followed by going to the kitchen to prep lunch or dinner. We'll draw maps detailing everything we did that day before we go outside to play "robot tag" or any other game he comes up with. We'll use sticks as swords before we play soccer in the mud.

So if he wants to ask for the Pink Power Ranger outfit for Halloween? Big deal.

And after his brother is born? Yep. I'm probably going to screw him up just as much by staying home with him as well, loving on him, and letting his personality shine brighter than my expectations.

If only more children had that opportunity to be "screwed up."

You are an amazing man, Sonny. And I'm sure you're a kick ass dad.

Also, being a Bronie is TOTALLY a thing and any parent who doesn't know that is seriously behind the times.

Also I am so mad at my own sex for giving you crap about how you raise your son. Women need to get a damn clue.

Finally, my nine year old son has very long hair. He is frequently told he looks like a girl, or should get a hair cut. He loves his long hair. So step off, yo.

This was the awesome. The end.

Keeping going mate, you're doing the right thing! I'm a stay at home dad as well and I've had similar experiences. Sadly I've experienced more hassle from fellow Christians than those who aren't.

Thanks, friend. Coming from you? This means the world. Seriously.

I've gotten SO much grief from people who share my faith that it's almost impossible for me to think about it.

HA! Thanks, friend. I miss you. Tons. We should talk sometime soon (and not just via characters in a text).

I am so proud of you and I would really like to watch Tangled with Kai sometime. Maybe as a sing-along? Because those songs are great.

Sonny, everyone knows that men are not chefs. Cooking is women's work. And men don't eat fruit. They eat meat. You should get your son some plastic steaks. And get him a doll - who can cook the steaks for him while he watches TV and drinks beer. The toothpaste was a false dichotomy as well. The real answer is that ALL of the toothpaste is for girls. Men don't brush their teeth. In fact, you should get your son a can of children's chewing tobacco instead.

I'm telling you - anytime you want a Skype date with the kid...

Your son is a great kid who's going to become a great man...just like his dad.

Sounds to me like your son might be headed for the noblest vocation to which a man can aspire, fatherhood. I see this sort of thing all the time with my nearly eight-year-old twin boys. Before I retired from over 30 years in the restaurant business, I was still waiting tables and the boys would come in and then go home and play pretend restaurant. I loved it, so cute.

As an aside, in those same years, I knew one Head Chef that was a women and maybe two GMs who were women.

Well done, Sir! From a father who has "screwed up" his son as much as you have!


We've been in New Zealand for a year with our now-three-year-old. I have noticed here that such things as you describe don't seem to happen. Maybe we're running with a less intrusive crowd, but little boys even wear nail polish because, you know what, it's fun to paint them! Especially if they have older sisters. Would this happen in the US?

I never realized that there was a toothpaste specifically for girls. Are their teeth different than boys? Great post.

If Kai (or the as-of-yet-unnamed Kid #2) ever wind up being dads, I'll be over the moon if I'm able to see them experience this. Not only because there have already been plenty of "I hope you have on JUST LIKE YOU" moments already, but because we need more dads who grew up with a decent template.

I have to admit: showing unconditional love and support is an AWESOME way to "screw up" a kid. :)

Doubtful; a lot of what I've encountered with other SAHDs in other countries is that the USA has a decidedly gender-biased/slant towards how boys are "supposed" to be raised.

Great post. Great kid (and ergo, great dad!) I sometimes WISH people would pester me about some of my parenting choices so I could get up on my soapbox and defend them. Or at least have more juicy stuff to write about. :) My challenge is more in the opposite direction, as I'm one of 2 dads raising our decidedly very "boy" boy (also 3). Sometimes he chooses the Disney Princess sleeping bag at daycare or wants the Dora beach towel, but for the most part he's all go, all action, all the time!

As a child, my preference was to draw, watch cartoons, and play dress-up indoors rather than ride my bike and play outside. Luckily I also had very loving, accepting parents who let me be myself. Peer pressure did its work to keep me from being "me" for many years, so I'm working hard not to do the same with my son.

I hear you, Brent. I had parents who tried to mold me in many ways, which meant I had to work double time to actually find the "me" I am supposed to be.


I'm not going to let that happen with my kids. If Kai and as-of-yet-unnamed Number Two want to dress like pirates one day and host a tea party the next, provided their tea party has no political affiliations, I'm down with it. :)

As a man who used to work as a nanny, this is awesome!