It was one of those days where - quite honestly - at the outset, I dreaded that I was going to be home with Kai all day.

The day began poorly enough: bad sleep due to my going to bed late coupled with having to tuck the boy back in to bed at least four times during the night; cold, rainy weather outside which meant the dog and I would both get soaked when I took her out to pee; and the realization that it was only Tuesday, which meant three more days of a 9-10 hour shift each day in parenting with no break. I could feel my frustration level rising while my patience dropped proportionately with each passing tick of the clock.

By 7:00 am, he was already hyper and kept telling me where he wanted to go, which clearly was not in his room at his house to play with all his toys. Because that would have been, you know, easy.

I'm not sure what changed my mind. Maybe it was the recognition that the days of he and I being able to drop everything and go off on an adventure are rapidly drawing to a close and will end once his brother is born this summer. Maybe it was due to my One Word for this year consistently coming back to nudge my heart and mind at the most "inconvenient" of times. Maybe it was the realization that I didn't want to have him spend the bulk of the day playing alone or watching a disproportionate amount of TV just because dad was in a bad mood and had less of a desire to interact with anyone.

So I dressed him. I dressed me. We grabbed our respective drinks (coffee and carrot juice) and got in the car to head to Monkey Joes.

And while I was driving, I started smiling. Cracks in my angry, tired veneer started to widen. We laughed. We talked like robots. We debated what to eat for lunch (beetles or socks). We made up songs, changing the lyrics to reflect a story about dinosaurs who can't dance.

And like a cold breeze blowing across my heart, snapping it to attention, I felt as much as heard the words: 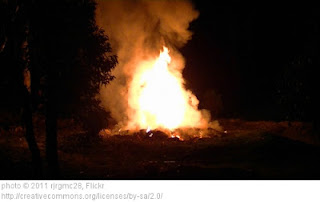 We often fall into the trap of thinking that everything - from a worship service to a group of friends just hanging out - has to be event driven. I was convinced that with Kai, that was how parenting had to unfold: there always has to be a new craft made, a new park to play in, a new book at the library to be discovered in order to make memories and have him be emotionally healthy. I forget that when Ashley and I dated, we sucked at "dating:" most of our happy memories come in recalling the moments when we did...stuff, not when went to restaurants, movies, or did anything normally associated with what couples do. Our marriage may seem positively catatonic when compared to others. But the immeasurable times of quiet, bonding, and simply being that we have had works for us.

There's a reason still, small voices sound the loudest and can be heard better than a shout.

My taking Kai to go and play was not an inconvenience for me (as much as I thought it was going to be). It was an opportunity for connection. For communion. For us to spend an hour and a half looking into each others' faces, laughing together, and simply being.

If I hadn't been driving when the thought first hit me, I would have taken my shoes off. For symbolism.

As it was, I was left with the desire to metaphorically remove whatever covering I had across my mind, my heart, my emotions.

Because this moment was holy.

God was here with us, joining in on the conversation about if beetles or socks would make a better lunch. Staring into our eyes. Laughing with us. I AM caught in a state of being in a moment.

It was a thing of beauty.

Sure, it may have involved a red-faced, sweaty kid at the end of it all (who also managed to score five new plastic army figures - can't imagine what soft-hearted sucker helped him to win those). But it was no less holy.

And although the day began with dread, it didn't end with regret.

Loved this friend. So beautiful. Holy moments are to be found anywhere we stop long enough to be fully present in them. Thanks for sharing your heart so openly.

I've had to go back and re-read this a few times myself this week. It is all about being present - and sometimes, it's about putting yourself aside to be able to be in the moment.