In the interest of full disclosure, I feel I should state that I've known Matt for about three years now. I've shared a few laughs with him, guest posted over at his blog, and although we don't see eye to eye on everything (because, quite frankly, that'd make our relationship a bit dull), I consider him a friend - even though his lack of any kind of body fat infuriates me. Knowing his heart and his passion for the subject matter, I was honored to receive a copy of his book in advance for review.

Okay - stop me if you've heard this one before: a music major, a theater major, and an art major walk into a bar...

...because that's where we'd go to commiserate over how no one understood us.

That was actually representative of a fair chunk of my undergraduate experience. I was a music major, and most of my close friends were majors in the arts as well. Whereas many of our friends majoring in comparatively logical fields - you know; the sciences and humanities - had concrete aspirations looking at law school, graduate school, teaching positions, or research fellowships following graduation, we did not. There were some among us who had their eyes on the prize of what they wanted to be when they grew up (music copyright lawyers; advertising executives; costume designers; and the like), but the vast majority of us spent four (plus) years...being. Creating, Yes, many of us graduated with fear and trembling in anticipation of bagging groceries or something following commencement, but those years were golden. We spent them refining our crafts and our passions.

And although we always knew we were a little odd, I don't think any of us realized exactly why we were. Part of the reason is that - and I'm being honest here - creatives tend to be a little kooky. But also, we were among the rare few who never stopped feeling comfortable in expressing our skills. 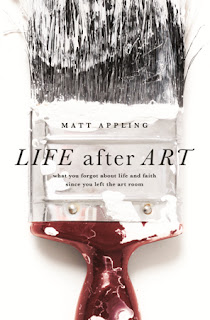 In Life After Art, author Matt Appling discusses at length how the art and craft of creating is something lost by many once we cross the Rubicon known as middle school. Obviously influenced by his years as an educator, the manner in which the text is written challenges the reader to not only think about the lessons that Matt presents, but also included at the end of each chapter are questions to reflect on and answer. It's as if the book comes loaded with a discussion guide - which is great, because while it's obvious the subject matter of Life After Art is designed to spark creativity, it can and should spark discussions as well.

Interspersing the text with lessons from his personal life, lessons from his classrooms, and lessons passed down from the creatives who inspired him, Life After Art reads less like a "how to" guide and more like a "why to" manifesto for inspiration. Matt draws from his faith background - irrevocably shattering the stereotype of how "PKs" turn out - and manages to utilize sincere, not cheesy, analogies and Biblical parallels about creativity in humans which reflect our Creator.

If there was one area of mild dissatisfaction I might level against the book, it's how Appling doesn't allow the lessons about creativity to speak for themselves and instead draws the points or conclusions for the reader. Sometimes art just needs to be art and speak for itself. I suspect part of the reason each chapter ends neatly and with resolution is because as Christians, our mindset - especially in preaching - is to set up and resolve a lesson in a finite amount of time. However, asking for a book about creativity to be more creative isn't exactly a criticism.

After all, musicians have never fully understood artists. And Matt? The girls liked it better when we musicians sang to them than when they got your little drawings. Just FYI.

All in all, Life After Art nicely fills a void evident in mainstream Christian publications. With a glut of existing texts written to be encouraging, give five paths to, or superficially illustrate how we can do things with God, it's refreshing to find an author like Appling willing to exemplify how we have the freedom to simply be with God.

As an added bonus should you purchase the book, when you email in your receipts for Life After Art to LifeAfterArtBook.com, you will get three free resources from Matt and Moody Publishers: copies of the deluxe Life After Art ebook with bonus chapter, the Life After Art Field Guide, and The Art of Storytelling.

So grab a smock and join me in being a little creative. The fine folks at Moody Collective have offered me an extra copy of the book to give away (and not, you know, flip for sale on eBay or something). So write in the comments below what is your great, unrealized creative dream. That garage band you never started? That sculpture of a mountain made out of mashed potatoes you wish you'd done? One lucky reader between now and April 5 will be selected at random.
Scribbled by Unknown at 6:00:00 AM

I want to write my memoir.

Well, I do plenty of writing articles as a fulltime reporter, but I still dream of seeing my name on the cover of a book someday. ;) I'd love to read this book!

My dream is the same it's been for a long time, the one that I seem to be caught in a riptide with: to write a book.