October, 2012. I stood outside the door of the office I had used for ten months. Staff members and volunteers walked hurriedly past me, avoiding making eye contact, just as they had done for the past few weeks. I let my fingers lightly trace the nameplate attached to the outside wall, fighting back the tears that threatened to erupt. Ten months. It was my final Sunday serving in the role of Interim Minister of Students at this church. And as I smiled at the memory of too much soda, too many corny jokes, and ultimately too few days with these kids, I kept wondering "If only..."

"Did I let the opportunity to finally work full-time in ministry slip through my fingers? Will I ever be afforded a chance like this again? In choosing to be, to love and to act like myself, not conforming to a set of expectations and thereby demonstrating that I didn't fit in with the leadership of this church...did I make the right choice?"

Four years earlier. I stood in a hallway outside a completely different office door, cradling a four month old infant. Students and custodial workers grinned at the sight of my son, occasionally greeting him in that high-pitched voice we tend to speak to infants in. I smiled softly at the irony that it took less than the span of a heartbeat to end a thirteen year career in Student Affairs. Thirteen years. It was the day after my final day of employment at this university. And as I thought back on a decade-plus of advising, mentoring, late-night insanity and life-changing conversations that took place over lattes, I kept wondering "If only..."

"Was I walking away from what I was called to do, from a career and a passion I lucked into and found myself in love with? I have utterly no clue what I am going to do with this kid day after day as a stay-at-home dad. If I commit to this, can I or will I ever be able to find a job again? In choosing to act on actually putting my family first and not just giving lip service to the idea...did I make the right choice?"

Five years before that. I stood inside my bathroom, staring at the reflection in the mirror. I was alone, and it felt like the chasm where my heart used to be made everything in the apartment feel distant and out of phase with reality. My eyes were bloodshot, my hair was completely disheveled, and my face was sunken and hollow from the night I had spent lying on my living room floor, crying until I was sick. After a magical night of dancing, laughing, and opening my too-often-pierced heart to her, she dropped the "f-bomb" - "friend" - on how she defined our relationship. Two years. Two years of letting myself feel, of spending time, energy, and love on cultivating a relationship with her, and in the end I was found wanting. And as I felt the mixture of fury and hopelessness rising like so much bile in my throat, I kept wondering "If only..."

"Why? Why did this have to happen again, when I hoped, I prayed that this time...this time it would be different. That I wasn't the only one that felt this way. After all the emotional and spiritual damage I have inflicted on myself, is there anything of worth left inside of me? Am I even capable of being loved? In letting myself be vulnerable enough to care...did I make the right choice?" 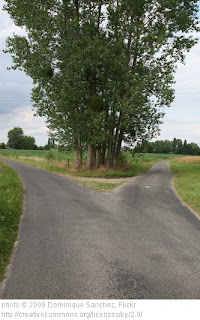 We like to quote Robert Frost like he's some lost Prophet, that the road that diverges - forks - in the road is some beautiful, amazing, experience to undertake and behold. Too often, we forget that these forks in our lives, like the forks on our dining tables, sometimes puncture and pierce as well as guide. We take solace in the promise of Jeremiah 29:11, but secretly wish that He would just drop a hint, a clue, or some sign of what these plans might be. It's the difference in being anxious about stepping out onto a fork in the path as opposed to stepping on a fork in the path.

We want the knowledge without the corresponding potential pain.

We wonder "If only," or "Did I make the right choice?" many times, simply because we're human. I know me. I know I'm going to worry, to doubt some of my choices. But that's only because the unknown remains just that: the unknown.

It's not as if I am putting my hand to a plow and then turning back; I just tend to question if I am gripping the plow the right way, if I might have grabbed the wrong plow by mistake, or if I'm even plowing in the right direction.

We wrestle and struggle with this because no matter how much we may wish it to be, neither our faith nor our lives are governed or the same principles as a Magic 8 Ball. It's not as if should we not like the answers given to us or the uncertainty of it all we can just nudge God a little and voila! a new or non-hazy reply shows up. Our nice little contained ball of blue fluid gets shaken through choices made or circumstances forced upon us we, and then have to deal with what side of the triangle comes up. Even if the way we respond to the answer given is to reject it outright and work to make a different one fit better with our vision for how we think life ought to be, we still must acknowledge the answer given to us.

The struggle in this journey comes when we wrestle with finding peace in our soul when all we can feel is turmoil in our stomach. There's a reason the Holy Spirit is referred to as Comforter in John 14:26: He is sent to not only remind us of all that was promised us (like that whole never leaving nor forsaking us deal), but also to help ease the mind and soul of neurotics like me who at times feel terrified or unsure because we've stepped out in faith onto Mr. Frost's metaphorical divergent path.

The woman who broke my heart? We're friends still. There was something - someone - far better waiting for me. Someone more wonderful than I could have ever imagined who would love me for the me of who I am...and we've been happily married for more than half a decade now.

The career anxiety? To quote Monty Python, I got better. There was a calling - a passion - to be found somewhere between the mountain of laundry and the tapping of fingers on a keyboard. It's a drive that nurtures and defines me, and it has given me friendships more meaningful than I could have ever imagined. And maybe one day I'll get paid to do it as well.

The potential for a future career in ministry? Well...we're not promised answers to everything. Nor are we told that every dream we have will be fulfilled.

The One who is called "Faithful" simply calls us to be faithful as well.
Scribbled by Unknown at 5:30:00 AM

"The struggle in this journey comes when we wrestle with finding peace in
our soul when all we can feel is turmoil in our stomach."

Finding God's peace and comfort when our fears, anxieties and doubts about our decisions and unknown future is certainly no easy task, but each time we surrender them to Him and truly trust, we draw closer to where He desires us to be.


Have a Blessed Day!