Suffer the Adults to Come Unto Me

Working in Children's Ministry ruined church for me.

The church in Athens, GA I was attending/serving/working multiple volunteer hours in already had me committed to about as much as was humanly possible. I was involved with the Teaching Team (outlining the weekly sermons and series as well as trying our best to keep our pastor on track and not veer too wildly off topic), the Creative Team (designing and building the environments for said series), the Youth Ministry (coming in on Wednesdays, team teaching with two other adults), and I even took to the "pulpit" on Sundays more than a few times to greet, welcome, and generally act like a loon. I was about as active and involved as many of the paid staff were, but there was one area I steered clear of: 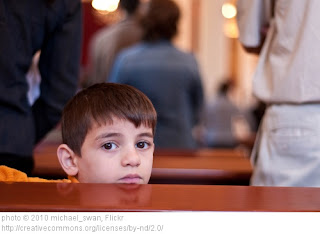 The Family Minister held a luncheon one Sunday afternoon for all the volunteers who served under his areas. It was early May, and he wanted to outline some of the needs for the upcoming summer that we could help with. One area in particular he mentioned was Children's Ministry. Since most of the adults who were already regularly volunteering with kids were also school teachers during the academic year, he made an impassioned plea that it would be the height of Christian generosity and lovingkindness if we would be willing to give them a full summer off: no teaching in school, no teaching at church. Given how many of us were there that afternoon, if we all signed up we would each only have to serve two to three Sundays, only during one of the services, over the course of a three month stretch.

So being the sucker/wonderful person I am, I signed up. "Why not," I thought. "I won't be doing this by myself, other adults can be there to talk to them while I just supervise the game room, and it won't be that bad. Plus, it won't last that long."

Jump cut to a year and a half later...

I was still serving people half my size and a third of my age week in and week out, sometimes by myself, during both church services, thereby effectively causing me to miss worship for months on end. Other volunteers backed out a week into our "fill in" run. The "we need you" card was played repeatedly. Yet although it frustrated me I felt like I was at times being used unappreciatively as a free servant, that's not what ultimately wrecked attending church for me.

It was the kids. The third through fifth graders I worked with, and how they modeled what church was actually supposed to be about.

Just like with the adults, we plotted out the weekly series perfectly...or so we thought. Because ultimately, they weren't there to sit through a praise and worship set, catchy video, and 20 minute lesson complete with memory verse, takeaway handout, and prayer time. And to be honest, they weren't interested in the deeper theological underpinnings of what we were trying to teach them.

Although they were doubtlessly dragged to church by their parents, once they got there, they were there for life: to play and interact with each other. For many of them, this was one of the only times they saw each other during the week. And they wanted to celebrate that - by playing foosball. By talking. By jumping off couches. They were already spending five days out of the week in school having to sit still, listen, and not have any "fun." To ask them to continue this on the weekend was the height of unfairness (to them).

So when we'd chat while sitting at the XBox or after a game of ping ping? They saw love in action. When we talked about God, life, or how much school sucked? We connected. Illustrating already-existing spiritual examples and showing how God was already at work in them and with them in their lives made for beautiful "aha" moments. When the emphasis changed from trying to make sure we made it through all five points in the lesson, there was growth.

They saw and lived what a community of believers was - is - supposed to act like.

As adults, we grouse about how church often isn't what it's "supposed" to be, about how there's a lack of connectivity or real life taking place. Part of that is because we've taken the uncomfortable stuffiness of church traditions we say alienate and traded them for rehearsed performances from middle-aged men in skinny jeans. Not that we should become kids and play freeze-tag during the sermon (tempting as it might be to tag the pastor) nor that we should let the place just go total free-form, but if the "relevant" video clip doesn't play, or the band is slightly off-key, or everything doesn't come off exactly as it does on the clipboard of the person who's behind the stage cueing up everyone?

I want the church I attend and raise my kids in to be one where we do life with one another. If there is pain, we share it. If there are victories, we recognize them. If we need to talk, we do it. Form and content never is to supersede heart and action.

The first time you fart out loud on a date is when your partner knows you're a person and not trying to act perfect and hold everything in.

We need more farts in church.

Great post, Sonny I still remember my good friend describing the time her son farted during communion...ripple effects of laughter throughout the whole auditorium. I so wish I hadn't missed that Sunday. :)

That is absolutely the kind of church I have been trying to find for my daughter and I. Not one that is so lesson planned and routinely tradtional. Not that those things aren't nessesary in certain areas but it just feels sometimes that traditional church kids ministry is raising a bunch of robots who may not really understand or feel what they are learning. They are just told that's the way it is. Same way with the message in adult church. It's pushed and pushed and pushed but there's no room to just BE. I think that's where my frustration lies now. Maybe it's not in line with your post at all maybe it is.
Props though. If someone farted in church, it might even be me. I'd bust out. Farts make me laugh.

Sonny I couldnt agree more. I really enjoyed this post. That is the kind of church im looking for. You gotta love the "we need you" card.

Personally, I'd love for the "we need you" card to go into the recycling bin...