The Great Meat Van Incident of 2013

I used to think that my life held some semblance of logic in it. Not much, but just enough to insure that the random occurrences that took place were moderately humorous, held some sanity behind them, and were not altogether completely bizarre.

That was before the Meat Van Incident.

It was a quiet, fun Wednesday afternoon. Kai and I were sitting on the floor of his bedroom, playing our version of Jenga (seeing how many ways and how high we could create towers out of the blocks before they toppled), when there was a knock at the front door.

Now typically, the following series of events happen at my house when there is a knock at the door: (1) Maggie begins barking (a lot); (2) Kai will race to the door to open it (without knowing who is behind it); and (3) I will race behind Kai to the door (to keep it closed and shush Maggie, all the while trying to not make a lot of noise so as to alert the knocker if we are in fact home). Basically it's a comedy skit in action.

On this particular day, the blinds in the dining room side windows were open, and I could see someone standing on the porch of the house adjacent to ours. A peek through the spyhole in the front door showed that there was a white van parked to the left of our house, obscured just enough by the trees in the front yard to not be able to make out exactly what the lettering on the van might have read. The guy who was standing on my patio and was the door knocker in question looked to be covered in sweat and was holding a clipboard.

To many, discovering a clipboard bearing, sweat-soaked mysterious visitor knocking on the front door after emerging from an unmarked white van might be cause for alarm or at the very least a bit of confusion. But, as our house is owned by the university my wife works for, such incidents are more commonplace than I'd care to admit. So, I opened the door with my four year old son standing next to me.

Instead of the usual greeting of "Hi," "How are you," or even a dated "What's up," I was asked the following question before I was asked my name: "Hey, man - where do you do your grocery shopping, and how much do you like meat?"

Clearly, this was not someone from Maintenance.

After stammering through a response about shopping at Whole Foods, Earthfare, and Fresh Market - hoping my hippie vibe would disarm him and turn him away - he informed me that he and his buddy (who had run over to my house at the first sign of some loon willing to open the door for them) were going around selling cases of discounted frozen meat. 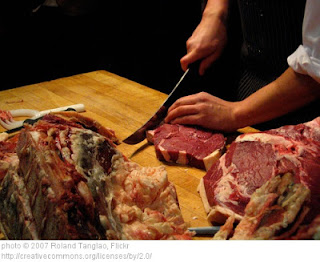 For a moment, I thought about just busting his balloon and telling him we were vegetarians, but come on. I had to see this through. This was just too rich.

I picked up Kai and carried him to said white van - which turned out to not be as unmarked as I had assumed: the name of their business (with "business" misspelled no less) was hand-painted on the side. Clipboard Guy's buddy stepped into the back of the van to open the side door so I could see their sales routine in all its glory.

What I saw instead was an empty delivery van with what felt like no air conditioning in it, two filthy pillows on an equally filth floor, half a dozen empty Marlboro Menthol cigarette cases, and in the very back, a deep freeze unit complete with a magnetic confederate flag on it. The freezer, at least, was cold based on the smoke rising around it.

I muttered "caveat emptor" under my breath while trying to not laugh out loud.

Clipboard Guy then launched into his sales pitch about how grocery stores charge you for the bones in the weight of the meat you buy (which is true), how their boneless cuts of hand-selected and graded by them steaks were just as good (which is dubious), that the variety of vacuum-sealed products they offer were just as good as what "rich people eat" (his words, not mine), that all I needed to do was "slap a piece of bacon around this right here" and I'd have as good a steak as I could get in "one a' them uppity restaurants" (which is as funny as it sounds), and that if I bought them today, as a special for Fathers Day, I could get two cases of roughly 50 different cuts of meat in each case.

After politely declining their somewhat ludicrous offer, they asked me if I knew where - ahem - "the hood" was. After they gave me a racially biased diatribe peppered with colorful phrases I refuse to repeat, they wanted to be pointed in the direction of whom they believed might be interested in buying some of their fine wares.

I gave them directions to Whole Foods.

After they drive away, Kai - who had been uncharacteristically quiet during the whole ordeal - turned and looked at me and made quite the astute observation for someone of his age:

"I gave them directions to Whole Foods" is the single best line I've ever read on your blog. I mean, I know you say important theological stuff, but like, seriously. Hilarious Sonny is best.

I do hope they were able to find some folks to buy some of that there rich people meet.....

Yeah - the way the meat looked (to say nothing of the oh-so-well played out sales pitch) was a massive turnoff.

I've missed me here as well. ...which is something I am going to change. Big time.

Thank you, friend. HIlarious Sonny may just start to make a regular appearance... :)

Thanks, man. You'll see me back again VERY soon...(after a few diaper changes)...