Out of the Silent #PlanetCCM

This is my little contribution to my friend Dianna Anderson's #PlanetCCM synchroblog. If you've never taken the chance to read Dianna's work before, you're robbing yourself. She is one of the most intelligent, intellectual, and at times polarizing writers in the Christian field these days. If you walk away from her blog without having had at least two to three challenges to the way you think about issues, you didn't read her words well enough.

As an old school Contemporary Christian Music (CCM) fan, I have to make a confession: I kinda hate today's Christian music market, and the majority of the popular praise and worship songs just annoy me to death.

But to be fair, part of my attitude comes from a little bit of jealousy. 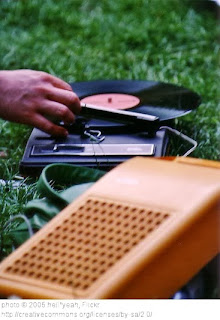 I grew up in northeast Mississippi. Having been born a tad too late and a lot too far right geographically to have been immersed in the "Jesus Music" craze that was sweeping the country, we remained in our nice, safe, sweet-tea laden cocoon of who and what was appropriate and Biblical based on our social norms. In the 1970s-1980s, clearly this region was the focal area in the country for where major paradigm shifts in the Christian culture were to take place.

We had one (1) AM Christian radio station that played CCM by the artists we were supposed to listen to: Evie; Twila Paris; Steve Green; Wayne Watson; Benny Hester; and so on. The majority of the cars on the roads had somewhere on them a purple bumper sticker with the call letters of the station and a white ictus fish on it so we could demarcate who was driving around town safely listening to Dino instead of the Oak Ridge Boys. It was like being in a club that almost everyone belonged to.

And we were told it was right and good.

But despite the crush I might have had on Amy Grant, something in me didn't feel settled,  didn't feel as uplifted and fulfilled by the music I was told was the best for me. By the time I was in middle school and was old enough to be in the church's youth group, I had mastered the art of tuning the radio on my Sony Walkman late at night to a local rock station so that I could at least try to understand why Madonna might be crazy for me, why men wore hats, or any of the other various odd comments my friends would make about the - gasp - secular music they listened to. Because the way they described their songs was with a passion I didn't feel for what I was listening to.

But still, I was told my music was right and good.

When we were lucky enough to have "contemporary" music in our church services, it was exclusively on Sunday nights, sung only by the youth group choir, safely hidden away from the eyes and checkbooks of the participants in the TV broadcast of the morning service and the adults who might find the notion of teenagers singing in four part harmonies accompanied by synthesized music offensive. We could have our music, but just not in church. Or at least not in a church service where such a style of music might come across as being validated by the church. Oh, sure - Amy Grant's Straight Ahead and Russ Taff's Medals might both be upbeat, but they were still safe. Our musical theology was demarked with the safety of a blue cassette or a red barrier that ended in Cr02.

And we were told that it was right and good.

And I believed it.

I suppose it's only poetic that right about the time I got my driver's license was when my outlook on CCM changed for me. I could sit in my car and blast away The Big Picture from a very non-"Friends"-themed Michael W. Smith or hear DeGarmo & Key get all bluesy with Commander Sozo and the Charge of the Light Brigade or Streetlight, but they were still..."our" artists. More in the church and of it than not. And while I didn't dislike them per se, the teenager in me who was struggling with the notion of rebellion and independence was tethered musically and theologically to a codependent church system that honored the pattern of a ten-song album, five songs per side, with one slow ballad per side fit for air play and that honored Jesus.

Because I was told that was right and good.

Loud, but right and good.

I still remember the first time I hit play on my cassette deck on an album from a group I'd never heard of before but took a chance on due mainly to the psychedelic album cover. There was a slight hiss through the speakers, and then I heard that cadence of drums in "Consider" from Chase the Kangaroo by the Choir.

From there it was a snowball effect of artists - Leslie Phillips; Mark Heard; Steve Taylor; Daniel Amos; Adam Again; the 77s; Mike Knott; Charlie Peacock; the Violet Burning; and so many others. My disposable teenage income shifted to mail ordering One Bad Pig or Absence of Ceramics cassettes and special ordering The Throes and Breakfast With Amy from the local Christian bookstore. I devoted hundreds of hours to words that captured me and fed into my heart the very thing I felt I had been missing for years before while spinning endless Petra and WhiteHeart albums.

These were not verse-chorus-verse ballads designed to uplift written by groups looking for a Dove award or an accompaniment track to be sold in the local Christian book store. They were artists, sharing painful and sometimes brutally honest lessons on life, faith, love, and why blowing up abortion clinics is just a stupid, stupid idea.

But more than that, I didn't feel as alone. Through these artists (some of whom I came to know in person in later years) I felt connected with a tribe of fellow lovers of music outside my city, state, and region. I found comfort and connectivity in the albums discovered hidden behind display stands of 4Him, Glad, and Carmen. I no longer felt like I was the only one discontent with the squeaky clean songs approved for the air.

To me, this was worship music. Because it was honest.

But it wasn't right and good.

To my church, at least.

Looking back, I now know there is no way stylistically, functionally, or socially my church - or truthfully, any church then or now - could have or would have approved the playing of or performing of the majority of the songs by these artists. Oh, but how I longed for it. We could stop playing "Crack the Sky" and move on to "Love Is Not Lost" or "Dig."

I now know now these aren't the songs written for or designed for corporate worship as we understand it. Voices can be, have been, and often are raised in unison singing "Darn Floor, Big Bite" - but in a concert setting. I might raise my hands and sing "Pray Naked," but that would never pass with the Senior Adults.

These are not right and good.

So how, it was posed to me, exactly can they be feeding my heart with the message of Christ if the lyrics are allegorical, meant to be interpreted, and not something easy to understand?

Because - you know - that's not like the Bible or God at all.

When I graduated high school, I packed up my CDs - the ones that meant the most to me - and left for college, leaving the church in many ways behind me. Like many first-year students away from home for the first time, I struggled to fit in, even with the campus ministries. Some of them were just extensions of our youth groups we'd graduated from. They were cut-and-paste, far too non-ironically like the lyrics of "I Want to be a Clone" for my taste, and so...I stopped. I dropped. and I holy rolled away.

For the better part of a decade, I wasn't a church-going Christian. I'd swing by on the odd visit, especially if someone I knew was speaking. I'd stopped my morning quiet time/devotional/fill-in-the-blank prayers a while back. I'd all but become the very kind of Christian that the 15-17 year old me would have mocked, felt pity upon, and prayed for due to my lukewarm and backslidden nature. Church as an institution meant pretty much nothing to me.

I may have been captured in time and space away from the church, but those CDs - the very ones by the very artists I was told were no good for me - they were the tethers back to a foundation of my faith that has continued to grow. And yes, I still have most of them. Some of them have been lost to multiple moves, ex-girlfriends, or eBay, but my iPod still holds hundreds of CDs and thousands of songs by people I'd venture to guess 90% of the modern church has never heard of.

And today, you can cut on any Christian radio station to hear a ballad, anthem, or worship song crafted for on-air play as well as in worship in church. The lines between the two have blurred and overlapped so much that many modern CDs basically serve as a playlist for worship leaders. They are songs written to connect - for under five minutes time each - in worship with the Spirit.

And this is right and good. Genuinely.

It's not what feeds me, but it can be right and good.

Just don't tell me what feeds me isn't.

They are right and good.

I for one look forward to one day Gene Eugene teaching those Passion kids a thing or two about song craftsmanship.

And that will be right and good.

And probably an utterly brilliant collaboration.

Yeah, I've never been able to convince the worship leader to break out "Ping Pong Over The Abyss" for communion music.