With all love and genuine respect to Nick and his blog for allowing me to parody his title. Really, though, if you don't follow his blog or Twitter account, you're missing out on a lot.

Insanity: doing the same thing over and over again and expecting different results.

This quote is attributed to Albert Einstein, which just goes to show that nine times out of ten, people who have multiple children aren't geniuses.

My journey as a stay-at-home dad has been well documented in numerous places, so I'm not going to bore you with the details yet again (nor will I encourage you to buy a copy of a certain book). What's interesting is looking back on my first four years with Kai  and viewing it through the lens of what typically happens in an academic cycle of a student who is starting college:

First Year - I have no idea what I'm doing. Stayed up late a lot. Ate poorly. Overextended myself. And a lot of my old friends didn't want to hang anymore; "You've changed," they said.

Second Year - Starting to get into a rhythm. Made a lot - a LOT - of Sophomoric mistakes. Still trying to find who I am and get a balance in all this. Cut back on the late nights.

Third Year - Rut. Feels like I've been doing the same things over and over. Tempted to just drop out.

Fourth Year - WHAT DO YOU MEAN IT'S TIME TO GRADUATE (TO PRE-K)? THE TIME WENT BY TOO QUICKLY! I'M NOT READY (FOR HIM) TO LEAVE AT THE END OF THIS YEAR!

Not that Child Two equals graduate school, but you get the basic gist.

Elias was a bit of a surprise to us. Ashley and I had just started the discussions about me returning to the workforce part-time once Kai began school when the studio "green-lit our sequel," so to speak, thus ending the need for me to revise my resume. And while we never had an in-depth discussion on if I would/should stay home for Round Two, we both just made it an unstated thing that I would. 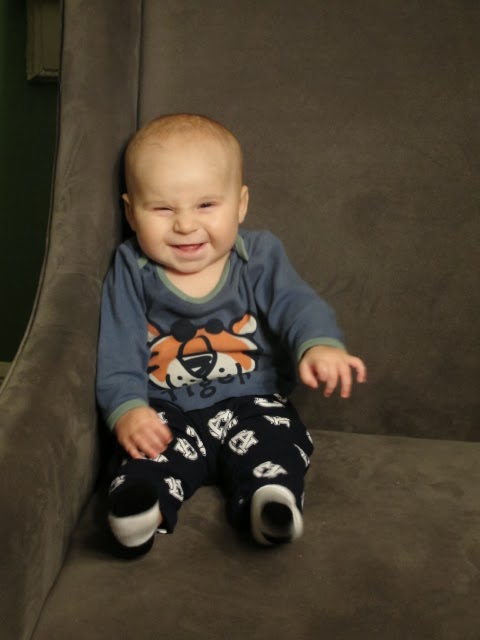 Bear in mind that I don't regret making this choice - again. That I feel staying home - again - is the right thing for me to do in this season of my life. And that I'm not distraught nor upset by another go at building my upper body strength by repeatedly carting around a car seat and diaper bag.

I'll admit that at first, I thought Eli didn't like me. Here I was, with him as a SAHD since day one of his life, daily and repeatedly administering various lotions and cremes to his private areas, giving him food, baths, playtime, and reading to him. Yet, when his brother or his mom walk in the room, he lights up. Ecstatically lights up.

Not that he didn't (and doesn't) smile at me, but there is a euphoria that apparently is created in his little heart when someone other than the Bald Guy Who Changes MY Diapers comes into view. However, these days the only way he is willing to nap is if I hold him, with his head balanced in my left arm close to my heart.

Clearly, I hate this.

Any parent of multiple kids will tell you: raising Child One is an exercise in establishing your learning curve in parenting. So if/when Child Two comes around, you're absolutely certain you've got this. You already know exactly what to do in any given scenario.

The two biggest flaws in this "logic" are: (a) in the interim time between kids, no matter the gap, you forget a lot. Most of it. Only Pavlovian responses to crying, soothing, and suppressing a gag reflex at the mysteries found in diapers remain; and (b) each kid is different. Drastically. What it took to tame Thing One will not be what it takes to tame Thing Two.

So I've had to relearn what it takes to be the primary caregiver while simultaneously trying to balance being a dad to multiple kids at once. Learning to not let the needs/demands of one overbalance the needs/demands of the other has been challenging, and Lord literally knows I've not been perfect at it.

My kids are on two different cycles - and I'm not just referring to their sleep patterns. Both need hugs, both need time with each parent individually and collectively, and both need to be seen as a person in their own right. Repeatedly telling myself to not expect the same results with Thing Two four years after first trying them with Thing One has been a hard, hard lesson to live through. Mainly because it would be just so much easier - for me - if I could just parent on autopilot.

I just need to relax and embrace the insanity that is parenting.


Amen. Times four. It's terrifying and lovely to see them each as individuals, especially when so often they're just the collective "the kids." Great thoughts here, my friend.

i experienced my first understanding of the "stewie" character on the Family Guy. while Devon clearly needed me and i was certainly chosen for specific things, i wasn't the idea that, as an infant, she was in a love/hate mode secretly planning my demise. she seems to like me now. and is way cuddlier than before. that's called "nurturing," not militantly demanding affection by smothering her with contact.