Staring Grace in the Face

I'm weird when it comes to forgiveness.

For the most part, when a friend offends or slights me - intentionally or otherwise - I tend to let it go. Within reason, that is; if we're talking about a case where it would be unhealthy for my relationship to continue with them, I - begrudgingly - will allow said relationship to fade out, bearing them no ill will. But I will forgive them all the same.

And believe you me: I have been dealt some soul-searing wounds from words and actions against me by people who claimed to love me.

It's not easy, and the human instinct is to chalk yet another tic mark on the internal tally of "who screwed me over this time," all the while making note of whom to trust just a little bit less the next time we're together.

The paradox I struggle with comes when I consider this grace of forgiveness as a person of faith. On one level, when confronted with the depth of forgiveness from the Divine and what has been forgiven of me, it makes things that much easier to look at someone and forgive them. It seems natural to let water flow under a bridge of forgiveness between two friends like so much blood that erases my own mistakes in His eyes.

Yet while I am willing to forgive others who have hurt me, it is exceptionally difficult - almost impossible on some levels - for me to look others in the eye whom I have slighted and not feel embarrassment, regret, shame, and a sense of never being able to make it up to them, no matter how much they may say I am forgiven.

And believe you me: I have done and said some stupid, stupid shit in my lifetime. 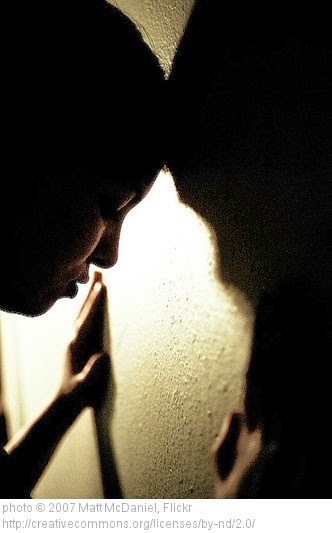 I feel like I have to perform some manner of penance to make up with them and make things right between us. My internal critic repeatedly reminds me that "I owe them," and I burden myself unnecessarily with a cross of shame and pain that I feel I have to carry. No Simon of Cyrene to come to my rescue to assist me with this; and I wind up using this cross not as an eventual bridge between us but as a fencepost I set up to keep them out and away.

I have an issue with looking upon myself with the same eyes of forgiveness that I look upon others with. I can look at someone who has done me wrong and genuinely forgive in love, but I scarcely have that same courage to look at myself in the mirror and think I am forgiven by others, to say nothing of being able to say those same words of grace to myself.

But I try, and I'm going to keep on trying. Mainly because the alternative is that I live as a hypocrite. If I am unwilling to trust and believe that friends can and do forgive me, how can I expect for them to believe that I can and do forgive them? Additionally, this guilt and shame I carry many times weighs me down to the point of breaking. Breaking away from those who I know are my friends and would not want me to be out of their lives.

If I have recently or in the distant past done or said something to offend you, embarrass you, disappoint you, or otherwise slight you - consider this my public apology.

If I have made an ass of myself, if I have let you down, if I have done you wrong - consider this my public apology.

I have just enough lines under my eyes that I would prefer them to get deeper through memories and experiences while smiling and laughing with you and not for them to become a repository for tears of regret and pain as I self-isolate from you and allow the past to hinder our future.

Friend, your vox to me months ago rings in my brain ALL THE TIME. That was the best "dumbass" anyone has ever offered me.