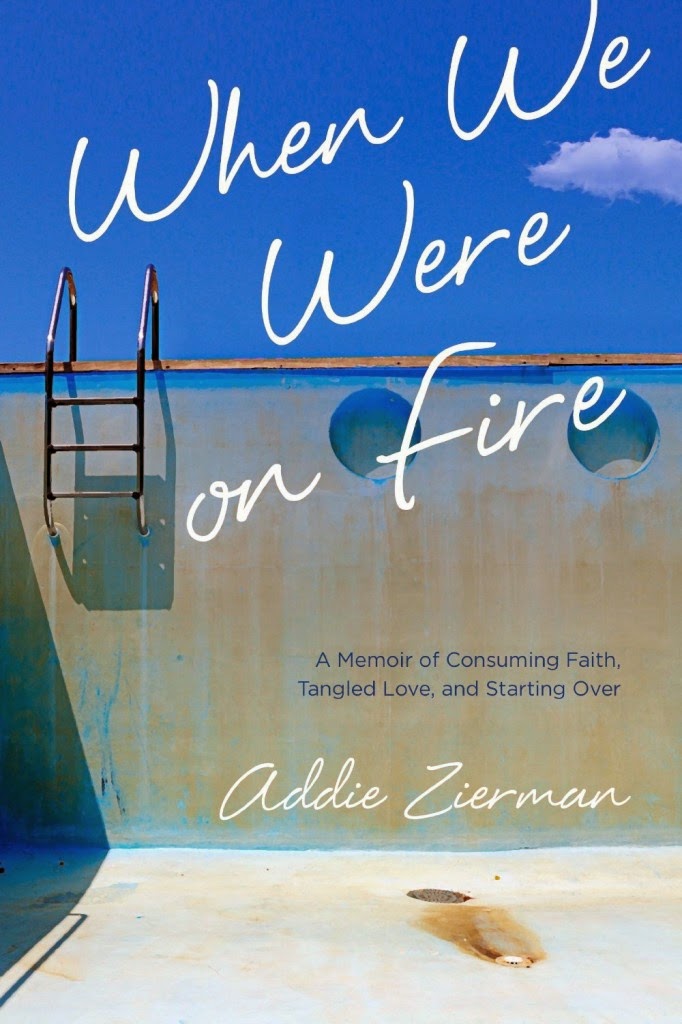 While tracking the progress Addie Zierman was making on her recent signing/reading/promotional tour for her book When We Were On Fire, I noticed she was going to be traveling close to my home in South Carolina. Although I wanted to go hear her, having just completed a six-hour round trip in my car a few days earlier, the idea of yet anther trip sounded massively less than appealing.

Plus, it was a school night. I couldn't stay out late.

After noting that she was going to be driving through Columbia while en route to her next destination, I sent her a message asking if she and her kids might need a travel respite so as to break the monotony/insanity instead of driving straight through. I had met Addie before, but it was only briefly at the Story Conference in Chicago two years ago. Both our oldest boys are only two months apart in age, so we have a bit of a connection there. But to be honest, I wasn't sure if she'd take me up on the offer.

I forgot the cardinal rule: friends online are friends in real life.

So after agreeing to come by my house for the boys to play on the fort in the backyard, I had a moment of slight panic when I realized she was coming to my house. Mercifully, I'd already cleaned earlier, so a little spot sweeping/vacuuming/Lysoling was all that was needed to make the house look less like an explosion of laundry and dishes had taken place and more like a home.

When Addie pulled up in her van, I was greeted with one of the warmest hugs I have ever received. Not one of those side-hug-"Hey thanks for the assist with my kids, random strange Internet dude" hugs but a full-blown hug. It was a hug that set my heart at ease, and immediately made me think that if we lived closer, our families might have similar gatherings like this more often than not. However, there was one remaining test our friendship was about to encounter:

Her kids. Entering the house. And going into Kai's room.

Bear in mind this fear did not stem from me being worried about them breaking/destroying/messing up anything in his room; it IS the room of a five-year-old boy, which means it's in a constant state of chaos. Instead, I was concerned because I'm fairly certain that this was the first time a fellow parent who is also a writer whom I know is a believer who has a kid roughly the same age as mine had been to my house and gone to my son's room. Additionally, my fear did not stem from Addie as a person. Addie the writer is an open book (pun intended), and is as genuine a soul as you are ever to meet this side of Paradise.

I was a dad hosting another mom in my house. My upbringing in the South and the nigh-phobic mania with "MAKE THE HOUSE LOOK GOOD BEFORE COMPANY COMES CALLING" is as ingrained to us as is the drawl with which (most of us) speak.

Any parent worth their salt will tell you: want to raise up the poster child of what a well-rounded kid is. Case in point: we will check out various Web sites, read story after story of "Hey my kid hated vegetables until I tried XYZ now it's all they want to eat," attempt to replicate said food, and then curse our lives as our child proves yet again to be the pickiest eater imaginable and we fall back on grilled cheese as a meal for the fourth time this week. We then say not-nice-things about the lying sack of excrement who wrote that fake pro-veggie blog post in the first place, all the while living in dread of the next play date when we have the only kid who uses carrot sticks as a weapon and not a food source.

Sometimes, Christian parents are the worst. We judge, and we judge hard. We critique what other parents let their kids watch on television, play with, and collect. When you're single, sometimes the litmus test of "how 'good' of a believer are you?" comes in the form of how many Bible studies you attend, how much do you volunteer at church, and the like. As parents, we might as well name all our kids "Isaac," because we're far too ready at times to sacrifice them on the altar of good perception. Yet too few of us have the faith to believe our kids would make it back down the mountain with us.

I breathed a sigh of relief as her boys exclaimed with boundless joy over the Teenage Mutant Ninja Turtles, Power Rangers, swords (actual toy ones, not "of the Spirit" ones), Cars vehicles, and other such items littering his floor (and bed, and closet, and...). Other "Christian" parents might have raised an eyebrow over how our DVD cabinet is weighted towards Pixar and not VeggieTales. Other parents might have pursed their lips at the stockpile of Goldfish Crackers (enough to last a nuclear winter) and how they were not straight from Whole Foods.

Yet I was gifted with a visit from two energetic kids who ran in my hall (gleefully, because that's how mine do it), played with toys other parents might suggest hold an "evil" sway over their kids (those darn Pokemon cards!), and got to have an actual grown-up conversation in the middle of the day with someone writes so magnificently that her grocery list is undoubtedly written with such grace publishers could get into a bidding war over it.

And if nothing else, seeing Addie and her boys reminded me that life is all about the mess and how we deal with it. We can stress about it to the point of where we become so comfortable in the facade of everything is okay on the surface that we never deal with the dirt under the rug. Or, we can choose to embrace that everyone has cracker crumbs under their cushions.
It's not gross. It's not a judgment call on you as a person.

And it's messily beautiful.