The Yellow and Black Attack

As a Christ follower, I believe that every person and every thing on this planet is created and designed with a divine purpose and plan in mind for its life. However, there are four possible exceptions to this rule:

Those who know me well know of my fear - nay: phobia - of all things arachnid. When Ashley and I were first dating, the revelation of my lack of "manliness" around these eight legged demons came when she discovered that I killed a spider on my back porch by chucking a cement block at it from the other side of the fence. Since then, and fearing that I might toss a shoe/can of corn/chair/potted plant through a window in my zeal to kill off these invaders, we have taken on distinct roles when it comes to pest removal in the house:

She kills spiders. I kill everything else.

There are only two problems with this rule:


Last summer, I became aware that a new (to me) breed of crawling hell spawn was infesting our neighborhood. I was walking Maggie past an empty house one night (problem #1), without my glasses on (problem #2), near where a streetlight had gone out (problem #3). Through my hazy sight, I noticed what looked to be a spider suspended in midair. Upon closer inspection (meaning I almost walked face-first into this Sheol of webbing), I saw that it was indeed a spider. A spider that was approximately the size of my palm and fingers were I to stretch out my hand. A spider which had spun a web roughly two feet in diameter.

I think the next time I saw a doctor, they made note of my having hypertension. It may or not be related to this. 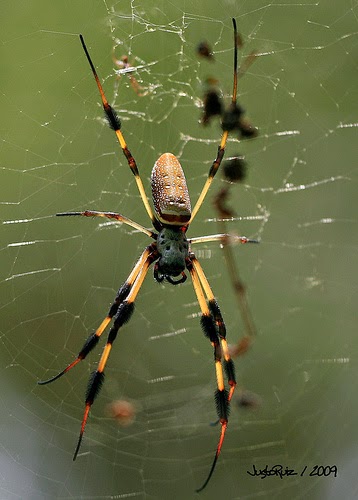 Since last year (and Ashley taking on the role of Xena to rid our neighborhood of not one but two of these oversized escapees from the world of Harry Potter), I have learned these crawling personifications of nightmare fuel are called banana spiders. How and why something with the name of a creature that sounds like it should be sequestered in the Amazon is living - and breeding - in South Carolina is beyond my understanding. But breeding they are.

I should know. I've found two of the probable offspring so far this year. I say offspring because while they lacked the Toho-level oversized proportions of the two from last year, they make up for their stature with the size of their egg sacks.

One was brazen enough to build a web stretching the breadth of the stairs leading to our back door. Yes. It was trying to encase the house in a web so that it could eat us. Apparently it was raised on a steady dietary stream of watching ARACHNOBHOBIA. Ashley killed it, although I still feel the need to salt the earth upon which it was smooshed, fearing it may rise again.

The second sighting was last week. About seven houses down the street (STILL TOO CLOSE), I saw another of these infidel creatures, mocking gravity, God, and the laws of nature as it brazenly hung upside down on its web. This one, larger than the one that tired to cocoon our house, somehow, I let live. Maybe it was a sign of maturity within me. Maybe it was me finally beginning to come to terms and live in peace with all of creation. Maybe it was a sign of respect, that if I don't mess with it, it won't seek revenge upon me.

Or maybe it was just that I knew that if I didn't kill it on a first strike, I'd freak out and probably jump into the street and get struck by on an oncoming truck, all the while screaming in a register that would make glass panes shatter throughout the city.

But just to be safe, I'm going to Lowes today to stock up on cement blocks.

I'm sorry for your fear, but happy that you let one live.

I'll spare you the details on how awesome they are, but know that we name them individually over here, and let them take over the yard.

God still loves you and has a plan for your life, Craig. Mine is just less infested with (IMHO) creepy crawly things. ;)