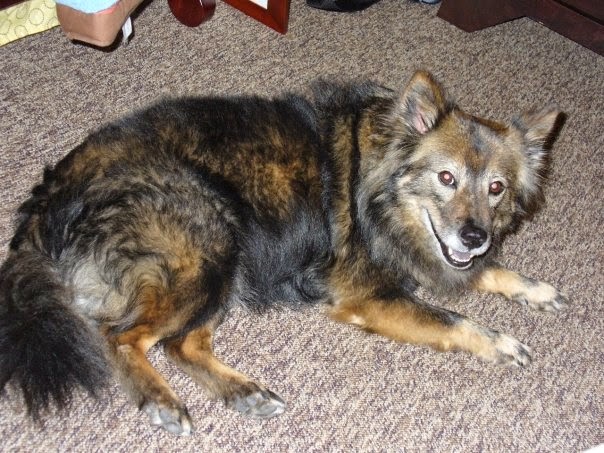 Ashley and I had been dating for a relatively short amount of time when I found myself as the caretaker of a four year old Chow/Shepherd mixed breed dog. Because Ashley couldn't have a pet in the residence hall where she was serving as Hall Director, Maggie was living several hours away with her mom. I offered - out the kindness of my heart (and blindness of infatuation with Ashley) - to serve as host for Maggie while we were both working at the University of Georgia.

Just a few days into our new living arrangement, Ashley was astonished when I told her Maggie was voluntarily sleeping every night in the bed with me. It turns out "Maggie doesn't do that with anyone" except for her. She was "too independent" to do such. While Cricket, my dog I had adopted in 1994, preferred to sleep on the floor next to a cracked window for fresh air, Maggie apparently preferred my company to the bed she had.

We joked that if we ever broke up, we'd have to discuss who got to keep Maggie. But still, at the end of the day, Maggie was Ashley's dog.

Nothing says fun like an interstate move with two dogs. Maggie and Cricket had tolerated each other as roommates for a few years, but they had never truly gotten along...until we moved them to Miami.

We joked that the trauma of packing up their house and then driving them for several hours stopping only for breaks in the grass might cause them to bond, but we didn't know the depth of truth to that idea until the first afternoon we we in our new apartment in south Florida.

Maggie was still Ashley's dog, but she was also now Cricket's best friend.

For days, Maggie would just walk up to and stare out the glass door she last saw Cricket being carried out of. Late one night, Ashley and I had to take Cricket to the Pet ER after she started breathing irregularly. Maggie kept waiting for her best friend to come home, but Cricket never would. The tugs of war between them for chew toys, the competition to see who could look the most pitiful when begging for scraps, and the question of who could mark the most territory outside had come to and end. Maggie grieved in her own way the loss of her companion. The thirteen years Cricket was with me would never be enough.

Maggie was still Ashley's dog, and they mourned together.

We weren't sure Maggie was going to be okay with this new addition to the family. We didn't know how she was going to deal with not being the focal point of attention, and no longer being an only child.

But she astonished us: she was incredibly protective of the little bundle of stinky diapers that came into "her" house. Any time someone came to see Kai, she would sit at attention next to me or Ashley, whichever one of us was holding him, guarding her new baby. His crying never bothered her, she never got upset at the late nights/early mornings when all our sleep was disturbed, and his making food rain upon the floor at mealtime was just an added bonus.

Maggie was now Kai's, and Kai was Maggie's.

We upended her world yet again by adding a second baby to the mix. This time out, Maggie was less protective when people came over; maybe she finally realized Ashley and I weren't going to drop him or forget to feed him all the time, so she could relax her patrols a bit.

But Eli and Maggie have a special bond, a different bond. The number of times I've come into a dangerously quiet room only to see him sitting on the floor next to her, cuddling her like she is one of his toys, is innumerable. They're a team.

Maggie is the boys, and the boys belong to her.

Maggie is at peace.

We made the hard, almost impossible choice, to let her spirit go free. Ashley discovered a pet hospice center that would allow her to pass on in the comfort and love of the home she felt comfortable instead of the comparative clinical coldness of a vet's office.

But for one day, for her last day, Maggie was more like herself than she'd been in weeks. Attentive. Responsive. She gave Ashley and I the most beautiful of gifts: a day of remembering our daughter as she was, not as she'd become.

For today and for eternity, she is now running in fields of grass, her best friend by her side. Chasing squirrels together, playing with her chicken, and resting in the most warm of sunshine. Her pain, confusion, and discomfort is at and end. And as best I can, I take comfort in that knowledge.

Ashley will grieve a deep grief as only a mother can.

Kai will grieve with questions, as the harsh realities of our mortal life shake him to his core.

Eli will look for his "da?" and not find her.

Maggie may have been Ashley's dog, Kai's protector, and Eli's cuddle buddy.

But she was my friend. My closest friend in so many, many ways. She was my at-home buddy for over five years. We shared numerous memories, secrets, treats snuck together, and walks a-plenty.

My heart is broken with the loss I feel.

Our house will be painfully quiet without the sound of her nails on the floor as she goes on patrol.

What an amazing journey you have had with Maggie. She will always be in your heart.