I've been staring at this bottle for some time now, turning it over and over again. The contents make a rattling sound, almost like rain. Or one of my one-year-old's toys. 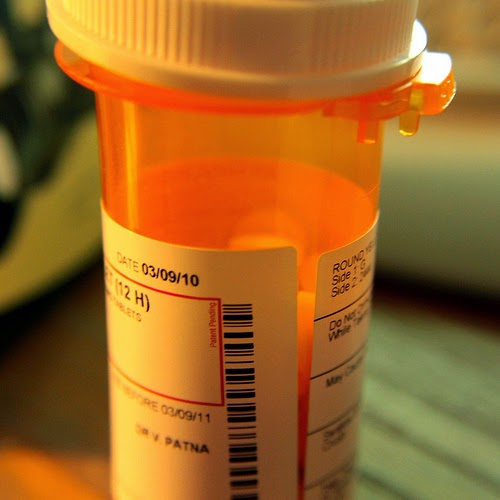 The label - mostly white with warnings written on a background of blue - bears my name. It is designated for me. The vital information is printed in ALL CAPS, so it will get my attention. But it also bears my name in ALL CAPS, as if it were shouting to the world to see that it belongs to me. It's like holding a screaming toddler while waiting in line in a store: you know it is yours, you're doing your best to take care of it, but the glares and looks of disapproval really aren't helping the matter, perfect stranger who is judging me.

The bottle stands as a landmark of sorts. It was easier to just talk about my issues and problems. By only using words, they seemed hypothetical, almost abstract. But now? There's tangible proof before me that words once spoken now have been given shape, form, and substance.

I'm not God and I didn't speak my problems into being. But now they have been given a name, and this name has power.

It's not the taking of the pills that worries me. This is a chemical imbalance. I'm dealing with a biological manifestation. Intellectually, I understand this. It's getting my heart on board with this idea that is the struggle.

It's not the concern that I will become dependent upon a "happy pill" to get me through the day. I'm not going to be brazen enough to state "Well, I could stop at any time," because I know the realities. If I go one day without my requisite 6-7 cups of coffee, I'm a beast in attitude and have the worst headache at the end of the day. Once these pills begin to enter my bloodstream and chemically regulate me, they - unlike my coffee - will be a necessary additive. Not an addiction.

I'm already addicted. I'm addicted to self-reliance, not being comfortable with admitting that I need help, with wanting to be seen as strong and reliant.

And this two-inch orange cylinder with the white cap on it shatters that idea. Because as soon as I take the first pill, I'm starting off on a journey. Again. One I thought I would not have to walk through once more, since it has been over a decade since I last was on antidepressants.

I've faked it quite well at times. I've pushed down, ignored, and supplanted the years of emotions with other things to focus when life kicked me repeatedly square in the teeth. But this year has been different. Too many loses, too many backhands from reality, too many tears.

And the fakery and ignoring the reality of my struggles has finally gotten to the point where I am too worn down to fight it any longer. I could handle it solo, but I have two beautiful, amazing sparkly-eyed boys that depend on me, and a spouse who I want to be the best for. So it is for them and in their name that I find the strength and courage to "push and turn" the cap.

Childproof. But not child-like faith proof. Because I'm taking these on faith.

Because it's not like I'm admitting online for the world to see that "Hey, I'm taking antidepressants," right?

Time to go refill my coffee mug so I'll have something to wash this down with.

And the curtain rises on a new beginning.
Scribbled by Unknown at 2:30:00 AM

Thank you so much for writing this, Sonny.